Helping Me Help Myself

Most books about self-help books tend to be hyper-critical, relying on time-worn old platitudes about the culture of selfishness and the lameness of most self-help writing. I thought that Helping Me Help Myself would be more of the same, though I was duty-bound to read it. 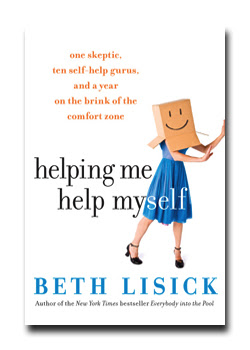 Instead I discover that Beth Lisick, a very funny and accomplished writer, has instead approached the subject with something of an open mind.
Deciding to spend a year being guided by different self-help gurus, Ms. Lisick details the standard domestic traumas of any 12 month period (incipient poverty, a car accident, a regular job dressing up as a banana) and how her new interest in the philosophies of self-help may be changing her usual reactions. And perhaps re-shaping her state of mind.
She reads Jack Canfield (even ends up spending a Thanksgiving weekend with him!), Julia Cameron and Stephen Covey. She goes on a cruise with Richard Simmons and has an epiphany during a Sylvia Browne live show.
Interestingly, the only person for whom she bristles with suspicion is John Gray, who during his seminar seems most intent on shifting his suspect range of health supplements.
Lisick manages to identify the genuine need which people possess as they seek out some meaning in life, and attempt to gain some control of their futures. Though many of our efforts can appear pathetic to the more cynical, the fact is that in one way or another the human creature will always, as Ms. Lisick says, "take stabs at being better or happier people." Those who poke fun at this impulse seem to forget that it remains the driving force behind all efforts at art, culture, spirituality - all forms of transcendence.
This book represents a genuine, and often touching, struggle to understand why regular people turn to mass-produced literature and information in an attempt to improve their lives and their sense of self.
Posted by Walter Mason at 12:44 AM 1 comment:

One of the more interesting phenomena in the recent history of self-help publishing has been the rise and rise of Eckhart Tolle.
It is really quite difficult to fathom the appeal of Tolle, but he has written one of the bestselling books of all time, so obviously I am a little out of synch with the rest of the world. But even his most diehard fans will admit that he is not a charismatic speaker, and someone from among my acquaintance who adores the man confessed that whenever she can't sleep she just picks up her well-thumbed copy of A New Earth and after just a few paragraphs she drifts off.....
As an author he is actually quite difficult to categorise. In a pefect world I wouldn't even list him as a self-help author, because I really think the books are more religious in content, spelling out a pretty basic Advaita Vedanta message and observing none of the standard forms of the self-help genre. But booksellers seem determined to shelve him in the self-help section, and it is marketed and promoted as a self-improvement book, so I will bow to the pressure of public opinion.
I do, however, think its disingenuous of people like Oprah (and Tolle himself) to state that the books make no religious claims and are compatible with all spiritual worldviews. Even the most basic reading of A New Earth will show that it delineates quite a specific theological viewpoint which is completely at odds with mainstream Christianity. This doesn't bother me, but fundamentalist Christians are quite right to attack it as a piece of quite specific religious literature.
Al these criticisms aside, A New Earth and The Power of Now are both such monumentally successful works that their influence will be felt for decades to come. I remember when The Power of Now first came out I was asked to review it, and my judgement was that it was dull and derivative and no-one would ever read it......rather humbling to look back on one's old pronouncements.
A year or so agao, when I was working in a bookshop, a man came in and asked wher he might find Eckhart. I automatically lead him to the enormous piles of Mr. Tolle's work, but the man looked at me rather nonplussed and said "Actually, I meant Meister Eckhardt...."
Don't get me wrong, I think the content of Mr. Tolle's books is perfectly acceptable. Indeed, for the most part I find myself in total agreement with him. It's just that it's all been said before - much more conscisely and much more interestingly at that. A New Earth is such a deathly dull book. I really don't know why people rave about it so.
Posted by Walter Mason at 4:45 AM No comments:

An idea that was very big in the 80s and early 90s, Codependence was a re-working of 12 Step ideas so that almost everyone could identify as an addict, and so benefit from the spiritual path of the 12 Steps. This idea had an immense influence in America, and books about it became something of a publishing phenomenon. The Codependence movement created its own set of superstars, most of whom are still around. Largest in the firmament was Melody Beattie, whose landmark (and massive bestselling) book Codependent No More I've just finished reading. Some of the other big names were Anne Wilson Schaef, Janet Woititz, and Charles Whitfield. Codependents were also very keen on the work of John Bradshaw (who has a new book coming out that sounds quite fascinating), but he was popular across the entire addiction/recovery movement, and any self-helper worth their salt spent a few evenings back in the 80s watching the legendary "Bradshaw Videos."
Reading the books now, one is aware of a certain old-fashioned desperation. The notion that we are all addicts seems quite dated today, and as a message it was always a little nihilistic. How long can you live with the idea that you are hopelessly out of control in your life, and all you can ever do is recognise this and turn to God for some semblance of stability? People seem to have returned to the old New Thought ideas - that we can shape our world with our thoughts, and everything is within our control.
Melody Beattie was always quite a good writer, and as the Codependence bubble burst she went on to write more general self-help books, all of them very good. But she will always be remembered as the woman who championed Codependence, and the notion that, at heart, we are all quietly desperate and in need of self-care.
Posted by Walter Mason at 1:37 AM No comments: