These days there are surely not many people left in the world who have read Madame Blavatsky's magnum opus, The Secret Doctrine from cover to bulky cover. Never an easy read, it has become increasingly impossible to comprehend, with its flowery Victorian prose and eccentric grammar. I have tried several times, but have never managed to get more than a couple of pages in before I become thoroughly confused. It wouldn't be the first great and important book to slide into obscurity, however.
Madame Blavatsky's star has faded somewhat, but the fact is that she was one of the most fascinating women of her own, or any other, time, and The Secret Doctrine was an enormously influential text. Indeed, it has probably had a much greater influence on the way we think and express ourselves today than most people would give it credit for.
Madame Blavatsky was the person behind the great influx of Eastern religious ideas into Western culture. Without the firm and slighly dictatorial guidance of Madame B, and the peculiar hodgepodge of Buddhism, Hinduism and Western Esotericism that is The Secret Doctrine, we would never have witnessed the popularity of Hindu gurus and Tibetan Buddhist masters that we are so familiar with today. Madame Blavatsky invented the New Age, and was singlehandedly responsible for making words and concepts like karma, Chakra and Lama the commonplaces they are today.
Henry Olcott, Madame B's great friend and co-founder of the Theosophical Society, was careful of the great lady's reputation after she died, but even he was puzzled as to how a poorly educated Russian emigrant was capable of producing a 2,068 page book. Like her, he credited the influence of her mythic "Masters" and, in his Old Diary Leaves, hinted that The Secret Doctrine had its provenance in more astral planes.
Reading The Secret Doctrine is really a commitment of years, and most Theosophical Societies around the world offer classes and study groups to help guide the confused. The more generous call The Secret Doctrine one of the world's great spiritual classics, on a par with the Bible and the Bhagavad Gita. I wouldn't quite heap such fulsome praise upon it, but one day I will read it in its entirety, and it really is the pioneer book of the modern world, filled as it is with orientalist imaginings and inspiring inunctions to evolve, grow and become more spiritual.

Posted by Walter Mason at 9:45 PM No comments:

When I was just a toddler I was taken to see the film version of Jonathan Livingston Seagull. Perhaps it was the Neil Diamond soundtrack that attracted my parents (my father was always a huge fan), or perhaps they imagined a Disney-esque animated feature filled with singing, cavorting seagulls. They stoically sat through the film, and later on it became a part of family legend - how insufferably bad and terminally dull was Jonathan Livingston Seagull. All throughout my childhood it was held up to me as the pinnacle of boredom. Should I complain of having nothing to do, my mother would roll her eyes and say, "Oh you're bored? Well you obviously don't remember sitting through the entire length of Jonathan Livingston Seagull..."
Richard Bach's novel, on which the film was based (what an idea!) was absolutely ubiquitous in the 70s. Every home had a copy, and as a child I would be drawn to it. With trepidation I would pull a copy down from my aunt's bookshelf and, just before I could crack it open, my father would shout, "Jonathan Livingston Seagull!? Ho ho, you're in for a treat there. Most boring book ever written. But it back, right now. Did I ever tell you about the time I took you to see the movie...?"
Years later I worked for a long period at Australia's then-largest New Age bookshop. I was surprised at how popular Richard Bach's novels continued to be. We always kept them in stock, and they would always sell a dozen or so copies a year, which is quite respectable for a backlist book. Even the dreaded Jonathan Livingston Seagull would be asked for on occasion.
Now, because of this childhood stigma I have never read a single word of any of Mr. Bach's books, so I'm not about to offer a critique. I'm sure they are lovely, and they are certainly an essential part of the history of New Age/Self-Help publishing, which means I'll have to be reading them sooner, rather than later.
Last weekend I went to the big book sale at the Great Hall at Sydney Uni, and it was heaven. I scored a box and a half of self-help classics, including a copy of Richard Bach's The Bridge Across Forever. I'll start reading it as soon as I've finished the wonderful Dennis Cooper short stories I'm currently reading. I don't like to have two fiction projects going at the same time.
Posted by Walter Mason at 1:25 AM No comments: 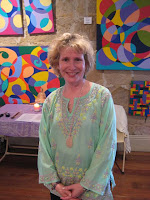 One of the few people left promoting the ideas of New Thought in Sydney is Laurie Levine, who conducts a monthly Positive Living Spiritual Service, and is the author of two books promoting her own eclectic spiritual vision. 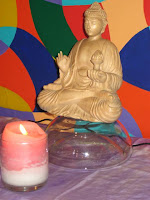 Originally from America, Laurie has been in Australia for many years, and is a popular yoga teacher and spiritual healer. Her first book, Spiritual Medicine, was published in Australia by Simon & Schuster in 1999, and later in America by North Atlantic books. 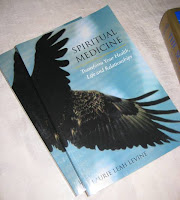 It is a remarkable book that encompasses a wide selection of self-help ideas stemming largely from New Thought, but also drawing from yoga, spiritual healing and other metaphysical traditions. Quite a charming read.
Her most recent book is self-published, and is a collection of blessings and prayers for use in all different life situations - it would be a perfect resource for any minister or celebrant. 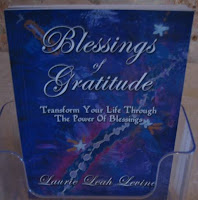 Hopefully Laurie will be releasing many more books in the years to come, as she is a gifted writer, with a palpable energy and a lightness of touch that make her ideas easily accessible and free of pretension.
These days Laurie is affiliated with Agape Spiritual Centre in California. This is the incredible "Trans-denominational" church whose minister, the handsome and charismatic Michael Bernard Beckwith, became such through his appearance on the mega-selling DVD The Secret. This church, and Laurie's own group, draws mainly on the Science of Mind ideas of Ernest Holmes, and represents a less rigidly religious vision of New Thought.
Agape is quite a phenomenon in America, where it has reached the status of mega-church, though without the dogma and right-wing leanings of most of the other churches that delight in that status. It has yet to gain the same degree of popularity in Australia, though Laurie is hopeful that the future will bring more people with interest and energy, inspired by Beckwith's books and appearances.
Posted by Walter Mason at 1:31 AM No comments: