In Tune With the Infinite - Ralph Waldo Trine I am slowly working my way through the classics of New Thought, and have just finished what is probably the grandaddy of them all, Ralph Waldo Trine's 1897 In Tune With the Infinite.
In Tune With the Infinite is one of those books that you see referenced everywhere. Quotes from it regularly start chapters of New Thought books, and Trine's name is invoked even now in all kinds of self-help books. In Tune With the Infinite was motor magnate Henry Ford's favourite book of all time, and he gave copies of it to all of his executives, insisting they read it. Ernest Holmes, founder of the Church of Religious Science, was great fan of Trine's work, and to date In Tuune With the Infinite has sold over 2 million copies.
That said, it is not an easy book to read. Written in the slightly flowery language of its day, In Tune With the Infinite probably deserves some more careful re-reading to get past its stylistic failings. And yes, I acknowledge that it's foolish to criticise an author for conforming to the literary conventions of his day, just because expectations are different now. I just feel I should warn prospective readers that an amount of patience is needed when reading the book. Though not long, it is packed with ideas, and really is in many ways the sourcebook of New Thought teaching.
Trine was s tudent of world religions, and one thing that really does shine through the book is his deep indebtitude to the ideas of the Eastern faiths, particularly Hinduism and Buddhism. In many ways In Tune With the Infinite is a reworking of the doctrine of karma, rendering it in a more theistic way and making the idea more palatable to a Western mind trained in conventional Christian ideas.
And like most New Thought writers of the time (and since), Trine was keen to emphasise that he was not advocating a new religion or a new set of dogmas and fanciful supernatural ideas. He advocated rationality in the face of the mystical, and the book is surprisingly free of the overtly devotional language that one encounters when reading Charles Fillmore or any of the later New Thought writers. He saw the new attitude as one of science and reason yoked to a spiritual vision based on quite a sophisticated understanidng of God and the universe:

"Reason is not to be set aside, but it is to be continually illumined by this higher spiritual perception, and in the degree that it is thus illumined will it become an agent of light and power."


An advocate of science and reason, Trine could also see the dangers of a more thourough materialism, and wanted his readers to negotiate a western Middle Way between the two. And while convinced of the infinite possibilities of the human mind, he was also no advocate of magical thinking. Like his more stolid Victorian forebears, people such as Samuel Smiles, he endorsed hard work as the very best way to ensure happiness, prosperity and good fortune.
Self-help critic Micki McGee suggests that Trine's work popularised the transcendentalism of his namesake Ralph Waldo Emerson, and melded it with a more materialist philosophy, the fusion becoming the very essence of New Thought.
"Thoughts are forces, subtle, vital, creative, continually building and shaping our lives according to their nature" says Trine, setting out clearly what would become the ultimate trope of self-help writing until the present day - the notion that our material reality is a product of our own thinking. As problematic an assertion as that is, it is one that carried (and continues to carry) an immense cultural power, and Trine's influence on the modern imagination and concepton of the self has been greatly undervalued.

Posted by Walter Mason at 4:17 AM No comments: 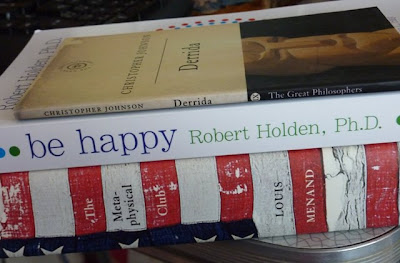 I am in a state of false security, having sent a chapter through to my supervisor last week. I really can't afford to feel self-satisfied, because I need to be sending him another chapter in about 3 weeks, but the mind plays tricks on one, and I can't help but feel I have all the time in the world. Here are some new books I have purchased for research. From the top:

Christopher Johnson Derrida - Philosophy is my weak point, modern philosophy especially so. To that end I am trying to educate myself with brief and simple introductions to key philosophers, in the hope that I'll be working up from there.

Robert Holden Be Happy - My next chapter is on pop psychology, and this book is perfectly suited. On a personal level, it looks interesting, useful and fun.

Louis Menand The Metaphysical Club - I was led to this book after reading Courtney Bender's fascinating new book The New Metaphysicals. Once Bender wrote about it and teh controversy it caused, I knew I had to read it.
Posted by Walter Mason at 5:39 PM No comments: 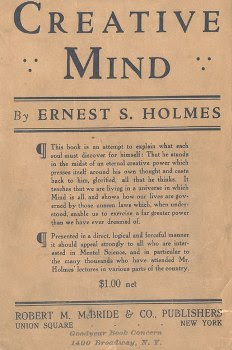 Creative Mind was Ernest Holmes' first published book, written long before he was a celebrity preacher with a massive following. It's a nice little book which, considering how early along in his career he wrote it, stands as a surprisingly good (and wonderfully concise) introduction to Holmes' philosophy. Interestingly, it is said that Norman Vincent Peale read this book when he was a young man, and that it had a profound influence on him.
The book is an extended discussion of the New Thought idea of the creative mind - that Divine Mind which is innately creative and to which we are all (or at least should be) connected to. God - or Mind - is constantly creative, and this creation moves in an upward direction. We are all evolving into better beings and it is through our connection to Creative Mind that this happens.
In many ways this book sticks much more closely to a Christian Science idea of the Universe, which is not surprising because it was around this period that Holmes was studying with Emma Curtis Hopkins, the grandmother of New Thought and a woman who had once been Mary Baker Eddy's closest associate.
For the early Holmes the Universe was all spirit, and nothing material was reality - a notion familiar to anyone who has studied Christian Science. He says:

"There is no physical explanation for anything in the universe; all causation is Spirit and all effect spiritual. We are not living in a physical world but in a spiritual world peopled with spiritual ideas."

This is, of course, a reasonably complex and sophisticated theological vision, and one that is, if anything, even more difficult to grasp in our inherently materialist age than it would have been in 1918. In the book Holmes is radically anti-clerical as well, insisting that the path to realisation was available to us all, with absolutely no intermediary force required. He actually retained this hostility to religious organisation and institutonalisation all his life, though a huge church somehow managed to build itself up around him.
Holmes despised dogma, and he particularly despised the dogmatic churchmen of his day, who he saw as wilfuly misinterpreting scripture and trying to stop people from having a real and dynamic connection with God. He saw himself more as a man of science, and his method as genuinely scientific - hence calling his philosophy The Science of Mind. As he saw it, the metaphysician was dealing with immutable laws and principles, not the arbitrary judgements and positions more characteristic of conventional religion. He saw God as a complete reality, one who would ultimately be discovered by science. Holmes was the perfectly modern man, in love with the new ideas of his age. Science, he said, could never destroy true religion, because it "is man's true experience of Reality" (Living the Science of Mind, p. 40). Religion might peddle its false dualities and its childish fears, but ultimately science would expose us all to the truth of God.
Healing, too, is presented in this book as the ultimate outcome of a genuine understanding of God. For in our illness we are merely allowing ourselves to dwell in error, to grasp onto a false premise. The laws of the Universe must always be productive of good, and so once we abide by these laws we are healed as a matter of course. Health is our primal state of being.
Anyone familiar with The Secret will also find much in this old book that is familiar. Holmes sets out the Law of Attraction, and assures readers that what is needed is to speak into the Universe all that we require, and it will be supplied to us. Proving, of course, that The Secret is a very old idea indeed, with a substantial literature and religious culture behind it.
Posted by Walter Mason at 10:54 PM No comments:

The Science of Mind on Personality

"Personality is the objective evidence of individuality. Our personality is the use we make of our Divine Individuality. Just as a fine architect uses only the best materials, and plans most carefully how to construct his building, so should we, in the building of personality, choose most carefully the kind of materials we wish to use. Each one builds according to the pattern of his own desires."