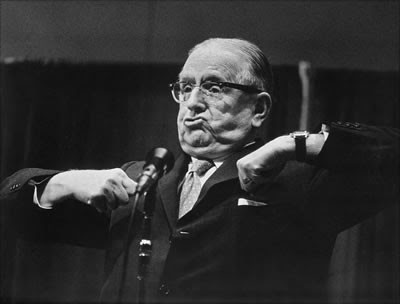 One of the giants of self-help writing is Norman Vincent Peale. He almost single-handedly defined the genre in the 1950s and 60s, starting off with his monumental bestseller The Power of Positive Thinking, and he established for decades a particular style of self-help writing, a style which is still being emulated today.

I have written before of the overt religiosity of Peale's writing, and his radical re-casting of Christianity as a positive aid to lifestyle and success both captured the zeitgeist of mid-20th century America and helped, in part, to shape it. The stolid Protestant friendliness of Peale's utterances, coupled as they were with just the right degree of acknowledgement of science and medicine, set the minds of a generation at ease. His great genius of expression inspired other writers, most notably the Catholic Bishop Fulton J. Sheen, who sought to do with Catholicism what Peale had done with mainline Protestantism. In Australia Peale's style was copied by the Presbyterian clergyman Gordon Powell.

Peale sought to reconcile Christianity with psychiatry, something M. Scott Peck managed so successfully a generation later with The Road Less Travelled. Peale established the American Foundation of Religion and Psychiatry right next door to his church, and from here he attempted a kind of Christian psychotherapy, employing professionals from both camps. It would seem that counselling was his great passion, and his books are filled with case studies of people he had counselled. He seemed inordinately proud of the new hybrid he had created. Of course, this movement seems these days to have come to nothing and at the very most Christian-tinged counselling and psychology has acquired a dubious name, associated as it has become with the extreme right-wing fringe of Christianity, and the mental and spiritual abuse of young women and gay people.

Peale, I think, would have been shocked by the state of things now. He was most certainly not a fundamentalist, and saw himself as a part of the great tradition of American liberal Protestantism. Though the language of his books is almost shocking to a contemporary secular audience, it's worth keeping in mind that his reading of the Bible and his theological understanding was distinctly progressive. Though he claimed all his life to be a conventional Protestant clergyman, and was lionised by people like Billy Graham and Ronald Reagan, he was deeply influenced by the ideas of New Thought, and was for a time a student of Ernest Holmes.
Like most successful self-help writers, he diversified into other forms of media, and was particularly successful on radio, where his program 'The Art of Living' ran for 54 years. He was also one of the first to produce audio versions of his books, and you can still buy recordings of him reading The Power of Positive Thinking.

These days Peale is deeply unfashionable, though his books remain in print. It is hard to imagine that his worldview, as unashamedly religious as it was, will ever again be mainstream. Self-help critic Wendy Kaminer, in her book I'm Dysfunctional, You're Dysfunctional, accuses Peale of being a magical thinker and "oblivious to social injustice."