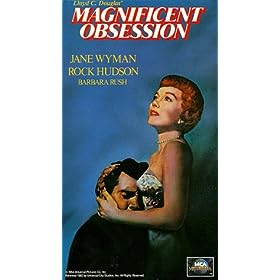 Magnificent Obsession is one of my favourite movies, for all kinds of reasons. Mostly because it's a film I saw several times on television as a child, and its settings and plot remained vivid in my memory for years afterward. I picked up a copy in Singapore a few years ago, and watched it over and over again, absolutely in love with its overwrought performances and implausible plot.
I also recognised something that had gone over my head as a child - the film's plot is overtly religious, though until now I've never really been able to get my head around the mysterious theology that informs the plot.
A couple of weeks ago I bought a new edition of the DVD, and it's simply marvellous. It features the original 1935 version of the film, as well as the 1954 feature (the one I love) with a fascinating commentary by Australian film historian Dr. Mark Nicholls.
Put quite simply, the film is a brilliant (if slightly over-stated) enunciation of the philosophy of New Thought. The original novel on which it was based was written by Lloyd Douglas, a retired clergyman who moved more and more toward New Thought ideas as he pursued a career as a novelist. The novel was greatly beloved by those in the New Thought field, and it is quoted at length in Napoleon Hill's Success Through a Positive Mental Attitude. In that book he advocates that all people should develop "a magnificent obsession" just as the character Bob Merrick does in the book and later the film.
Apparently the director Douglas Sirk was largely unaware of, and uninterested in, the film's underlying philsophy. He couldn't get through the novel on which it was based, and he never saw the original version of the film, in which the New Thought ideas are much more explicitly, and repeatedly, stated.
Of course, the degree of absurdity and high improbability of Bob Merrick's achievements in the film (becoming a brain surgeon in order to save the life of the woman he loves) tempers the power of its message to a modern audience. But it is nevertheless filled with a naive, melodramatic charm, and I defy anyone not to cry during its closing scene.
Posted by Walter Mason at 5:11 AM No comments:

Science of Mind is the organisation/philosophy based on the great New Thought philosopher Ernest Holmes. It was also the name of his enormous book, which still serves as the bible of the movement, and of the monthly magazine which is still published.
Holmes was a prolific writer, and a late-arriving student of Emma Curtis Hopkins, the woman most people consider the grandmother of New Thought, the teacher of teachers.
Holmes was obviously a charismatic and energetic man, because he established a religious empire which is still going on today. One of its most illustrious followers is Louise L. Hay, probably the most famous exponent of New Age beliefs in the world.
The basic philosophy of Science of Mind is pretty much the same as you would find in Unity or any of the other New Thought based churches. Also known as Religious Science, its founder Ernest Holmes never really intended it to be a new church. The magazine Science of Mind, which has been in continuous production since 1927, certainly has a readership well beyond the church membership, and many subscribe to Holmes' ideas without declaring themselves a formal part of the movement.
The fundamental idea behind Science of Mind seems to be that we are created perfectly, just as God is perfect, and so we are capable of achieving anything. We are all moving into a new age of possibility, and if we can align our thoughts with the energy of the Divine, we can become a race of supermen.
Like much New Thought philosophy, Science of Mind flirts with the fringes of spiritualism and Theosophy, and Holmes' magnum opus is littered with tantalizing references to the extraordinary possibilities of the human mind freed from the old ideas of negativity. The book itself is reasonably difficult to read these days. Its enormous size and frequently prolix style means that it is best consumed in small bites, rather than sitting down to read it from cover to cover.
Posted by Walter Mason at 8:19 PM No comments: