How To Win Friends and Influence People 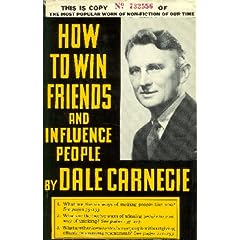 For many (me included), How To Win Friends and Influence People is the archetypal self-help book. Whenever people ask me what I mean by self-help (and I am constantly surprised by how few people have a clear understanding of what a self-help book is) I mention this book and they understand instantly where I'm coming from.
The elements that make the book a quintessential example of the self-help genre include:

First published in 1937, How To Win Friends... has been a perpetual bestseller almost ever since. There are various updated versions around, but these are almost more dated than the original, with their clumsy references to new-fangled things like VCRs. I prefer the good old fashioned original, complete with its occasional lapses into sexism and racism.
Carnegie was also one of the earliest examples of that peculiar self-help phenomenon - the person who becomes rich and famous through telling others how to get rich and famous. He had begun life in humble circumstances, and started his career as a self-improvement guru by teaching courses in public speaking at the YMCA.
Once his book had rocketed him to fame he established his own training institute, which still exists today, training businessmen in the quaint 1930s manners and courtesies which must be even rarer now than when Carnegie first started out.
Some have accused the book of being Machiavellian, encouraging people to manipulate others by cultivating reactions and responses intended to please and, ultimately, influence. Carnegie's methods have also been hailed as an early form of NLP, exhibiting a sophisticated understanding of human psychology - and frailty.
The most famous injunction form the book is to always be "hearty in your approbation and lavish in your praise." Carnegie contends that we gain more influence and regard by praising and encouraging than criticising and fault-finding. But he always stresses that any such praise should be based in genuine feeling, because "Flattery is counterfeit, and like counterfeit money, it will eventually get you into trouble if you try to pass it on."
And from all the accusations of cynical manipulation of the feelings of others, I feel I must defend Carnegie. What he is really encouraging is that we should all take a genuine interest in the stories and ideas of others. He is talking about the cultivation of a more open mind, and championing the art of interested listening. Yes, he says that such an interest in others will bring with it social rewards, but it may also bring about an improvement in character and learning in the practitioner.
In many ways it is a more conversational, and more detailed, examination of the hierarchical structures in which we all live, the systems of power that had been mapped out more conventionally (and less interestingly) in the etiquette books of the 19th century. Carnegie, a smart man of humble birth, had worked out that a species of power lay in acknowledging and feeding the power fantasies of others. Indeed, the whole book could be read as a Foucauldian exercise in rallying opower to the cause of one's own social advancement.
Carnegie was a gifted and charming writer, and even now the book is a very easy read, filled with nuggets of folk wisdom and constant references to the life lessons to be gleaned from notable figures in history.
15 million people have read How To Win Friends.. since its release, and it is almost certainly the most influential self-help book ever published.
Posted by Walter Mason at 4:50 AM No comments: 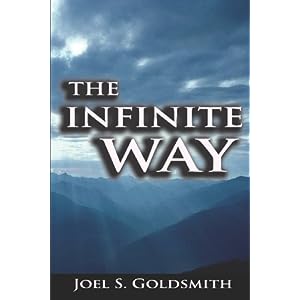 The Infinite Way is one of the great classics of self-help literature - indeed, it is one of the books on the 'Timeline of Self-Help Writing' that I put together for my thesis.
Based largely on the teachings of Christian Science, it is a slender book, quite poetic in its content and deeply mystical. Though not a formal exponent of Christian Science, Joel Goldsmith was influential in Christian Science circles. His works were great favourites of Doris Day, who said she went to bed every evening listening to audio recordings of Goldsmith's lectures. But in rejecting the formal affiliation with the church, Goldsmith places this, his most famous and enduring work, in the canon of New Thought, and it's is still read and enthusiastically recommended by serious students of New Thought.
Though short, it is reasonably dense, and is really meant to be read slowly and reflectively. Indeed, since its publication groups have sprung up devoted to the reading and study of the book, establishing around Goldsmith a quasi-religious structure. Such groups were active in Sydney well into the 1990s, though I'm not aware that there are any still going.
The central message of the book is the basic Christian Science doctrine that we are merely expressions of God, and therefore perfect. Goldsmith tells us that God's reality is all-good, and so the only truth is in abundance, health, happiness and prosperity. The only truth is God, expressed in many different ways. "God, Consciousness is forever expressing Itself and Its qualities. Consciousness, Life, Spirit, can never fail. Our task is to learn to relax and let our Soul express itself" (38).
The book is really an extended meditation in that same style - there is little that is practical here, for Goldsmith returns again and again to his central theme: we need only awaken to God, who is already in us. It is a devotional text rather than an instructive text. And as such it frequently transports the reader with great gusts of hope, and with a carefully constructed mystical longing. This is Goldsmith's power as a writer - he can make his particular philosophy, singular as it may be, distinctly beguiling.
"We must begin our days with the inner reminder of our true identity. We must identify ourselves as Spirit, as Principle, as the law of Life unto our affairs. It is a very necessary thing to remember that we have no needs: We are infinite, individual, spiritual consciousness embodying within ourselves the infinity of good..." (80). The Infinite Way (Goldsmith's first book), then, serves as a textual way to remind us of this heavenly identity. There is much of Swedenborg in this, as of course there is in the work of Mary Baker Eddy.
There is some discussion of healing in the book, and it seemed as though healing was a central part of Goldsmith's lectures, but he tends not to be too specific in The Infinite Way. The book takes an extreme position: there is no illness, and all healing is but the return to the promised spiritual state of perfection.
Goldsmith was a prolific author, and many of his books remain in print. The Infinite Way remains his greatest achievement, however, and is an absolutely intriguing exercise in New Thought absolutism.
Posted by Walter Mason at 5:26 AM 1 comment:

Ask Yourself This - Wendy Craig-Purcell

Ond of the podcasts I listen to religiously is Unity FM's Hooked on Classics. It is a weekly book club that examines books by and about the Unity Church and New Thought. From the point of view of my thesis writing it is a valuable process, because it really examines New Thought ideas in depth, and from a number of different perspectives. On a personal level, I enjoy the whole process of reading a book very closely over a couple of months and hearing it analysed week-by-week. I've always wanted to be in a book group, but my insane schedule doesn't allow for it. This is the perfect compromise.

One of the books recently studied was Wendy Craig-Purcell's Ask Yourself This. Craig-Purcell is a Unity Minister, and spoke about her own book on several of the shows. Needless to say I found this a prticularly fascinating exercise, a kind of anti-Barthesian commentary that actually says a lot about self-help writing and it's excessive intertextuality and self-referencing.

The premise of the book is that it represents a series of personal questions that the reader should ask herself. These questions are challenging and are meant, naturally, to facilitate personal and spiritual growth. As well as exploring the questions at length in print, the reader is also asked to meditate on each question and to journal on the reflections, thereby deepening the impact of the reading process.

The questions are not particuarly innovative or unusual, but they are broad enough to be quite challenging to answer, and spending time in wondering about them causes any number of additional questions to be formed in the mind of the engaged reader. Questions include such things as:

"What am I looking for?
Who am I trying to change?
If I knew I would be successful, what would I be saying "yes" to?"

The final chapter of the book is a peculiar diversion into the area of home schooling, something about which the author is passionate. Home schooling is a hot topic in America, and Craig-Purcell is keen to explore it as a religious person who is neither conservative nor fundamentalist. I must say that this section seems to sit awkwardly with the rest of the book, however, and for this reader at least added nothing to the process being explored. And certainly in Australia, where home schooling is a non-issue, this whole bit can profitably be ignored, and the book be wound up at the end of chapter 7.

Ask Yourself This is interesting because it is not a practical self-help book. Published by Unity House, the Unity School of Christianity's own publishing arm, the book is decidedly spiritual in bent, and the questions are intended to inspire prayer and reflection rather than specific action. This leaves the whole process of reading the book and folllowing its suggestions a much more open-ended process, and one I think would be quite attractive to many readers, particularly if they are of a more mystical bent.

I enjoyed the book, and interestingly I read most of it while I was on retreat at a Benedictine monastery, and it was the perfect companion on such an occasion. Slim and easy-to-read, Ask Yourself This is an excellent primer in New Thought and a nifty text for helping the reader to explore some of the more challenging (and more grandly focused) spiritual niches of the mind.
Posted by Walter Mason at 4:13 AM 2 comments: