One of the more colourful figures in the self-help movement is John Randolph Price. I am currently reading his Nothing is Too Good to be True, an ambiguous title if ever there was one. It is his usual eccentric and often inspiring collection of affirmations, prayers and madcap techniques to guarantee prosperity and success. The author makes some spurious claims as to the antiquity of the information presented in this book, making the usual assertions that his is merely a re-interpretation of a more ancient wisdom. Remember, The Secret claimed the same thing. In most cases the information is no more ancient than the forefathers of the self-help movement and the tenets of New Thought, Religious Science and Theosophy.
Mr. Price's great classic is The Abundance Book, normally coupled with is audio feature The 40 Day Prosperity Plan. Now, the significance of a 40 day plan will not be lost on some, and Price's method - which seems to me to be indebted to the work of Godfre Ray King - is based on the repetition of affirmations and attempting to imbue those affirmations with some kind of positive energy.
These are two area that I am beginning to realise will need some discussion in my thesis - the advocacy of affirmations and the wording of suggested affirmative phrases, and this idea of 'positive energy'.
Mr. Price is a charming, old-world figure, though in truth I find the books a little too rambling and hastily prepared to enjoy completely. They are released through Hay House, which should point toward a more spiritual emphasis in their teaching. Price was an advertising man who retired into the business of Metaphysics, setting up the obligatory spiritual organisation called The Quartus Foundation. He must be quite an age by now.
Posted by Walter Mason at 12:27 PM No comments:

The Power of Positive Thinking 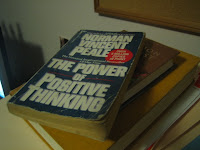 While I was in Phnom Penh I was delighted by the presence of really quite good second-hand bookshops - something that is absent from Vietnam. As usual in such places, there was an eclectic collection of books - heavy on chick-lit and murder mysteries, and also a substantial number of business and self-help titles. For US$3 I bought this well-thumbed copy of the self-help classic The Power of Positive Thinking, and it travelled with me all through Cambodia and Vietnam.
I had never read it before, so was surprised to discover that it is extremely religious in content - Peale's main advice throughout the book is to read and memorise scripture and use quotes from the Gospels as positive affirmations. I can't imagine it appealing at all to modern day self-help readers, who are largely an unbelieving bunch, and those that are interested in spirituality tend to steer away from the old-fashioned style of 'memorise scripture' Christianity.
It would be unfair, however, to characterise Peale as some sort of fundamentalist Christian idealogue trying to propagate a religious agenda by stealth. He was, after all, an ordained minister, and a famous one at that. Kind of like the Benny Hinn of his time, only nicer and more substantial.
Peale had been born a Methodist, but became a famous clergyman with the Reform Church in America, which was very similar in theology and worldview. And while the religious advice he offers in this book is perfectly inoffensive and acceptable to almost any kind of Christian, his own personal beliefs were reasonably unconventional and progressive - influenced as they had been by the New Thought teachings of Charles Fillmore and Ernest Holmes, and incorporating a species of spiritualism influenced by his reading of Swedenborg.
So it's an odd book - I wouldn't even call it self-help, more a prayer manual and a practical guide to using the Bible. But if you find it in any bookshop (and it is still in print) it will almost certainly be filed under "Self-Help."
Posted by Walter Mason at 10:58 PM No comments: