This week I am hoping to finish chapter 5 of my thesis, which is discussing the work of bestselling self-help author Stephanie Dowrick. And so I have been immersed in her books, most of which I have read before. I am using her 1992 book Intimacy and Solitude as my anchor text, though I will be drawing extensively on all of her other books - perhaps even her novels. As always, my task is to find patterns, repetitions and echoes of former writers in the books, as well as teasing out the influences and the traditions to which they belong.

Dowrick's work is especialy helpful on this front (representing rich pickings for me) because she clearly cites her influences, and there are many other writers and thinkers quoted in her work. As a theme for the chapter, and the filter through which I am interpreting Dowrick's work, I am taking "the return of the sacred" - a theme which is, helpfully, the subject of her most recent book Seeking the Sacred.

As with every chapter, I take a four-tiered approach to reading and collecting my research: First I read the primary texts of the author being discussed. I will also include here relevant, connected, material by other Australian writers. Secondly I read critical and historical material relevant to the particular chapter, including similarly-themed books published in America and the UK. Thirdly I hunt down journal articles relevant to the author and her themes. I have been greatly aided in this process by comments by Dowrick herself in her books - she is a clear sign-poster of the sources of her ideas and inspiration. In particular there is a passage in her 2004 book Free Thinking where she cites her influences as: "Alfred Adler...Martin Seligman, Carol Travis, Robin Skynner and Thich Nhat Hanh." A neat little reading list, to which I would probably add Rumi, Roberto Assagioli and Rainer Maria Rilke.
Posted by Walter Mason at 11:57 PM 1 comment:

The War of Art

When this book came out I was working in a new age bookshop, and it was one of those titles that come out of nowhere - no hype, no warning, just suddenly everyone was calling up and ordering it. I wasn't much interested then - the title kind of put me off, and I assumed it was aimed purely at visual artists.
Fast forward four years or so, and the author, Steven Pressfield, has shot to prominence one more with his rather daring new book Do the Work. Endorsed by Seth Godin, published by Amazon & Godin's new outfit The Domino Project and sponsored by GE, it represented a whole new type of book. I haven't read it yet, but am very keen to.
But all the renewed talk of Pressfield brought The War of Art to prominence once more, and after listening to him interviewed on a couple of podcasts, I knew I had to get it.
And yes, having read it I have become, instantly and unchangeably one of the members of the cult of Pressfield.
Put simply, this book will change your life and the way you look at your work. A few pages in I was shaken by how simple and how true it all was. It was as though the author was writing specifically about me and my own life history. And the thing is, EVERYONE says the same thing about the book. It really is that extraordinary.
What is its central message? That we all have a "work" within us that we were put on this earth to do, and unless we start doing it our lives will be frustrating, unhappy and ultimately destructive. Pressfield says that the task we resist the most is the one we are meant to do, and that we should do it first thing every day, thereby fulfilling our sacred role on earth.
And you don't need to be an artist, a writer or an opera singer to be able to get something out of this book. Pressfield is adamant that we all have an important task to do, even if it isn't what society would call "creative." Whatever you feel called to do - dance, travel, teach or (Pressfield's favourite example) run a plumbing business - you need to get out there and start doing it now. Your life depends on it.
I was so inspired by this book, but also gained some solid practical advice from it. He suggests we treat ourselves as our own company, and every Monday morning have a weekly task meeting for ourselves, writing out our list of jobs and duties that need to be completed by the end of the week, I am definitely going to start doing this.
The dangers that threaten to steer us from our true course are legion, and Pressfield is merciless in demanding that we jettison all of them. From being overly-sensitive to criticism to being lost in procrastination, The War of Art identifies all of these as traps, as part of the "resistance" that we cultivate, and allow to drive us from our best work .
You simply must read this book. It is by far the most inspirational book I have read in many years, and it has already had a huge effect on my life and output. All writers and creative workers will benefit from its advice.
The man is a genius.
Posted by Walter Mason at 3:35 AM No comments: 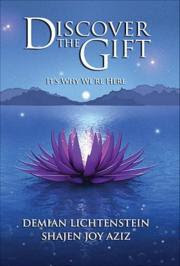 This is the kind of product that will be instantly recognisable to many – it is a book to accompany an inspirational film, a genre established simultaneously by The Secret and What the Bleep Do We Know.

And as in both of those 2 instances, the book stands alone as its own inspirational and motivating read. I was drawn in almost from the beginning as the brother and sister authors told their own personal stories of alienation and then renewed love and closeness.

And, like The Secret, Discover the Gift brings together some really big spiritual teachers who talk about our reasons for being on this earth. Not just a movie, not just a film, the authors describe this as a MOVEMENT! Some of the featured teachers include: Barbara De Angelis, the Dalai Lama, Sri Sri Ravi Shankar, Mary Manin Morrissey and my personal favourite Michael Bernard Beckwith.

So we’re in something that’s very much an established and popular tradition tradition. But that’s not to say that it’s not good – it is. Very stimulating, incredibly inspiring. Let’s face it, we always need reminding of these ideas:

· That life is the most precious, wonderful gift

That we need to practice more solitude and focused thinking

I particularly loved Jack Canfield’s contributions – he's the Chicken Soup for the Soul man, and if you haven’t read his newer book The Success Principles I really recommend it, as it will change your life. In Discover the Gift he is talking about establishing newer, more positive and productive habits in our lives, jettisoning the old conditioning.

One of the authors, the sister, Shajen Joy Aziz, stresses the importance of constant action in pursuit of our gift. Too often we let our talents lie fallow, when we should be employing them every day. She urges to do one thing, no matter how tiny, to keep the momentum of our dreams, and to keep us on that path of realisation.

Posted by Walter Mason at 11:52 PM No comments: