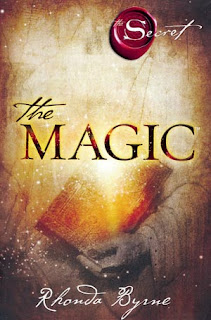 Rhonda Byrne is a self-help superstar. The once-obscure television producer from Australia became a household name in 2006 when she produced a simple talking-heads-style film about New Thought ideas and the Law of Attraction and released it as The Secret. Someone - it is not clear who - came up with a simply brilliant promotional campaign based on networks and influencers and releasing different versions of the film to key tastemakers and influencers. I worked in a New Age bookstore at the time, and remember dozens of people coming in and telling me how they had been given a version of a new film that was going to change the world....
It was a whisper-campaign that worked, and the film was quickly turned into a book which became a mega-seller which culminated in Byrne's appearance on Oprah. The Secret became a cultural artefact, and was ridiculed and scorned by people on all sides, all the while speaking in some way to the general public as it went on to sell millions of copies across the world.
Byrne has herself never been much of a self-promoter or even a public figure - she rarely gives interviews, and is something of an enigma. This year she has quietly released a new book called The Magic. Its emphasis is on gratitude and on the active expression of gratitude. This, says Byrne, is the key to a successful life. By actually invoking the words "thank you" we are employing a a metaphorical magic spell, hence the book's name.
For all of her critics and detractors (and they are myriad), Rhonda Byrne, or her team, is good at producing simple, clearly-expressed texts that communicate very well the basic tenets of New Thought, a religious idea that dates back to the 1860s. I am, in fact, a fan of Byrne's work, and I think she is one of the truly great post-modern authors, producing books that owe more to the traditions of television, film, advertising and  the oral traditions of Protestant Chrstian worship than to stale literary traditions and formats.
Though her message is repeated constantly, there is not an ounce of fat in The Magic - it has been edited to perfection and is an inspiring and entertaining read.
The central message of the book is that gratitude must be cultivated self-consciously. Byrne connects this to biblical narrative and the Western Mystery magical traditions, employing her usual scattershot approach to references, citations and quotes from across the canon of self-help.
I'm interested in the fact that this book kind of launched itself, with very little fanfare. I had no idea it even existed till I was browsing through Kinokuniya bookshop in Bangkok a month ago and saw a modest pile of the books on a well-placed table. Considering just how many copies of The Secret were sold, you would think the publisher would make more of a song and dance about a new book from the same author. Perhaps Byrne's famous reticence and shyness have an impact here. As it is, each new instalment in The Secret franchise seems like a surprise.
I call it a franchise deliberately. The Magic is designed and branded in such a way as  to advise the reader that this is an extension of The Secret. The cover art is an extension of The Secret's usual antique magical motif, and the first thing you see on the cover is the imprint of The Secret itself, above the title of the book. I think we are being presented with a series here, the publisher determined to remind the reader of the famous  book in order to sell this new one.
The book's format appeals to me because, unlike The Secret which was the presentation of quotes and ideas designed more for occasional inspiration than applied reading, The Magic is presented as a practical workbook, filled with 28 exercises designed to enhance the application of magical gratitude in your life.

"You will be captivated while you read this life-changing knowledge, but without practicing what you learn, the knowledge will slip through your fingers..."

It's an interesting exercise because there is not a great deal of literature that deals with the concept of gratitude as an exercise in mental and spiritual development.
Interestingly, a prominent Australian writer contacted me recently to tell me he has been working his way through The Magic and getting a great deal from it, because it was dealing in concepts and techniques that he had never actively considered before.
Posted by Walter Mason at 2:34 AM