What I'm Up To: Gordon Powell 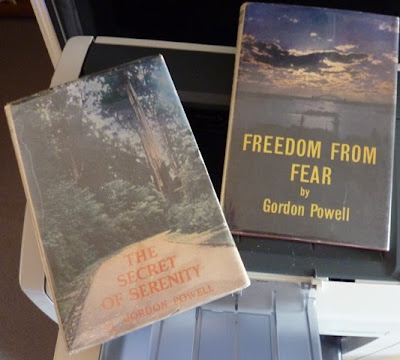 I'm committed now to writing one chapter a month in order to have my thesis finished by February 2012, so there's no time for dilly-dallying.
This month's chapter is focused on the writing of Australian Presbyterian clergyman Gordon Powell. Largely forgotten now, Powell was one of the most prominent and progressive clergymen in Australia in teh 50s and 60s, and he modelled his ministry very closely on that of Norman Vincent Peale. Rising to fame as the minister in charge of the beautiful art-deco St. Stephen's church in Macquarie Street, Sydney, Powell finally moved on to Melbourne, where he spent most of the rest of his life at the Collins St Independent Church.
He was a forward-thinking man, and for many years his lunchtime services at St. Stephen's were broadcast on radio stations throughout Australia. This was, of course, the kind of thing that Peale had done before him in America. And also like Peale, he branched out into popular self-help writing, creating books that taught the Christian message in an accessible, non-nonsense manner focused on psychology, happiness and the art of living.
In this chapter I am comparing Powell's work with that of Peale's, and I am describing the way that mainstream religion absorbed the ideas of New Thought in an effort to modernise and popularise its image. Norman Vincent Peale was heavily influenced by the philosophy and life of New Thought legend Ernest Holmes, though as a conservative Christian he was very wary of admitting this influence.
The key ideas of this chapter are:

Plus a few others that I probably won't get around to.
Powell, like Peale before him, was a lively writer, and the books are actually a pleasure to read. It fascinates me that these books were ever released by a mainstream publisher in Australia, because to a twenty-first century reader they seem so laden with religious talk and imagery, so much talk of prayer and miracles. They would never be released today.
Posted by Walter Mason at 2:11 PM No comments: 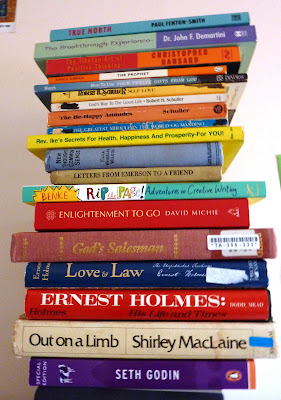 I'm probably quite fortunate in that I'm dealing with a topic that is based on mass-market books, so second-hand bookstores are usually a treasure-trove for me of interesting and related material. And from this pile you can see that I've been a very busy little bee indeed. So, from the top, here are the thesis-related books I've bought this month:

Posted by Walter Mason at 9:29 PM No comments:

What If It All Goes Right?

Mindy Audlin was one of the founders of Unity FM, and she has invented a New Thought process called 'What If Up' that has been in use among church and corporate groups for some time now. Her book What If It All Goes Right? is a fleshing out of the thinking behind the process, and is a fascinating explication of a new spiritual technology, one that is particularly representative of New Thought thinking and expressive of the New Thought world-view.
Having recently been the featured book on Unity FM's Hooked on Classics book club, I spent quite some time reading this book, exploring the process for myself and following the exercises the book provides. This kind of involved reading, which transcends the simpler method of passive reading that is usually associated with the consumption of books, is in a way the very benchmark of the self-help process, and is the way that most self-help books are intended by their authors to be studied. Of course, whether or not the average reader does in fact extend their experience beyond the perusal of the written word is impossible to gauge. But certainly the presence of an on-line study group and the prolonged examination of the book on the Hooked on Classics radio show helped to ensure a more thorough and prolonged engagement with the text than might usually be the case.
And what is Audlin's method? Basically it's an extension of a very old idea, one set forth most strikingly in the Pollyanna story (and I must admit here that I've only ever seen the wonderful movie): instead of finding reasons to quelch an idea or tear it apart, we should instead engage in Audlin's 'What if Up' process, and think of reasons why situations, projects, goals and dreams might, in fact, work out positively. It is a brain-storming process, and one which the author keenly advises us to practice in groups. So that one person might stand in the centre of a group of supportive friends while everybody contributes a positive spin to the idea, problem or desire recently anunciated.
Audlin admits that the basic idea for this process came from her involvement with mastermind groups. Such groups evolved from the thought of Napoleon Hill, of Think and Grow Rich fame. He advised that each of us establish a core of supportive friends who meet regularly to encourage each other, share ideas, and offer each other positive emotional support. Hill thought that people with such a supportive group of peers must necessarily have greater moral and emotional strength than those who seek to do everything alone, fearing the input and derision of others.
Audlin's book works through some standard New Thought tropes, and is actually quite a concise and clear explicaton of New Thought ideals and their practical application to modern life. One of the things the author asserts is that:

"We're working with spiritual laws in a world that is goverened by cause and effect...Just don't say I didn't warn you...The universe can pack a wallop!"

Those who have been following this blog or who are keen students of New Thought & Self-Help literature will recognise two key ideas here: the notion that what is being taught is in fact an indisputable law (an assertion that goes all the way back to Mary Baker Eddy); and the recurring convention of discussing theistic ideas but replacing the word "God" with more palatable concepts like "The universe."
Along with law there is the usual attendant invocation of the notion of science, in the case of this book a surprisingly insistent one. The use of scientific language reassures the modern reader, and takes teh book's discourse out of the realms of assertion and religio-mythic ideas. But in fact much of what is discussed has its roots in nineteenth century American Protestantism.

"The subatomic substance of the universe...responding to the focus and intensity of your dominant feelings."

Now, before you write in I do not mean to poke fun at the author or the book. I am merely identifying a recurring motif that is as old as self-help books themselves - the justification of opinions by the invocation of scientific rhetoric. I would suggest that what is being described is not, in fact, a scientific truth involving subatomic substances, but a metaphysical assertion.
Interestingly, Audlin herself invokes the figure of Pollyanna:

"Let me warn you that at first glance, the techniques you will discover in this book might seem a bit Pollyannaish. You may wonder how we could possibly solve the major problems of our time with a tool that is so simple and easy to implement. Surely, our complex issues require a more complex remedy?"

But no, as you may have guessed, the book assures us that in fact what is most needed is the very simplicity and good faith characteristic of that great cultural archetype Pollyanna. The meme of Pollyanna is one regularly invoked by both critics and advocates of self-help ideas, and I really must explore this further. Perhaps in a journal article? I will have to grab a copy of the book.
This kind of reductive approach to life is, of course, characteristic of self-help, and is the source of much of its criticism. But as always, critics would be missing the point that what the book inetnds to do is not address the misfortunes and inequities of a suffering world (though later chapters invoke the notion of global healing). What it seeks to do is merely equip the individual with tools to help her achieve more and maintain a more positive and productive state of mind. And it seems to me that this is a goal that is hard to criticise. In the self-help world global change is wrought, not by collective action, but by individual transformation and its subsequent flow-on effect.
It's an interesting book and, with its heavy emphasis on practice it is ultimately a useful one. It is also, undeniably, inspirational, and in the last analysis is describing that quality that I am coming more and more to realise is at the heart of self-help thinking - the idea of grace. I think it would actually be of tremendous use to someone struggling with depression or overwhelmed by bad conditions in their life. It is unashamedly and relentlessly "Pollyannaish," and to my mind that's no bad thing.
Posted by Walter Mason at 12:19 AM 1 comment: