The Science of Mind on The Universe

"The Universe gives us what we ask; experience alone will teach us what is best to have."

Each Mind a Kingdom One of the things that is most apparent when studying the history of self-help literature is the dominance of women. Since the earliest days of New Thought women have been the movement's principal leaders and followers. Certainly in the early literature of Australian self-help, immersed as it is in the philosophy of New Thought, women are the real pioneers.
American historian Beryl Satter has written an excellent book called Each Mind a Kingdom, which details the phenomenon of women in the New Thought movement.
In my research on Sister Veni Cooper-Mathieson, a wonderfully eccentric Australian author, publisher and spiritual leader, I noticed that she led something called the White Cross Crusade. I was surprised to discover that this was a society to promote celibacy aming young women. They met weekly in the Domain, and there was a companion group for young men. By the brevity of the mentions, I can only assume that both movements were not particularly well subscribed. Sister Veni wrote extensively on the subject of female emancipation, a key component of which she saw as being chastity among the young.
It wasn't until I read Satter's fascinating book that I realised that these crusades for morality and celibacy were an intrinsic part of the New Thought movement in America. Indeed, the position was seen as a progressive one, helping to combat the problems of unwanted pregnancy, venereal disease and the abandonment of unmarried mothers.
The New Thought movement saw itself as ushering in a new, purer age, in which women were empowered, and would no longer be enslaved to what was characteristically cast as the baser sexual demands of men.
Physical desire - and sexuality in general - was posited in this early movement as a problem, something to be overcome. It is fascinating how these early feminist visions were tied in with ideas of chastity and sexual purity.
Posted by Walter Mason at 3:04 PM 1 comment: 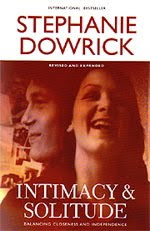 Australia's leading writer on matters of spirituality and personal transformation is without a doubt Stephanie Dowrick. Her lyrical and frequently literary books are also bestsellers, though they sometimes defy categorisation in any of the usual sub-genres of self-help. Drawing from a deep understanding of religion, mythology, psychology and literature, Dowrick's oeuvre is pretty much all her own, and is these days increasingly imitated.
Dowrick emerged from a background in publishing, which probably goes some way to explaining the great commercial success of her books. There is no doubt she has a flair for marketing, publicity and promotion which has seen her emerge as one of Australia's leading media commentators. In London in the 70s Stephanie was the founder and first Managing Director of The Women's Press, proving her pedigree as a feminist. It is that aspect of her writing that particularly interests me academically. I think she was among the first in the self-help genre to really speak to a female readership, though the books are in no way intended for women only. I am interested in reading the books closely to find out in what ways (if any) feminist ideas are engaged and explored.
She later worked as a publisher at Allen & Unwin in Australia. This, too, would be an interesting avenue to explore, though I doubt I'll have the space in my thesis. Maggie Hamilton is another publishing industry executive who went on to write self-help books. And, perhaps obliquely, Rhonda Byrne was a successful television producer before she branched out into the field of personal transformation. It's certainly an interesting phenomenon, and I wonder if I could find parallels in America or the UK.
These days Stephanie Dowrick is one of the pioneers of the burgeoning Interfaith movement, and noting the different religious references in her books would also be a fascinating endeavour. She has a background in Jungian psychology, and has been deeply influenced by Quaker thought. She also seems to have a clear understanding of both Buddhism and Sufism, which speaks to the extraodinary depth of her learning and her spiritual understanding.
I plan on bringing you a few little potted analyses of some of Stephanie Dowrick's books as I slowly piece together my PhD thesis. I hope you'll find them as interesting as I do.
Posted by Walter Mason at 4:27 AM No comments:

The Eternal Mind in The Science of Mind

Ernest Holmes' own specialised terminology flows thick and fast throughout his mammoth text The Science of Mind. I suspect that at times terms are interchangeable, but I may be wrong - he may be completely thorough and consistent in his subtle use of terminology. I would have to read the book many times over to be able to ascertain that, and to be honest I don't think that's going to happen.

There are many terms for God, and they are quickly identified by the capitalisation of the first letter. One of the most common is Mind, occasionally more clearly signified as Eternal Mind. This Eternal Mind is the creative, unifying force at work in the universe, the thing to which we are all attached, and from which we all emerged. It is separate from the small-m mind that we all possess, but only because we have limited our material minds, and enforced our own separation. In fact, the goal of Science of Mind (i.e. Holmes' philosophy) is to re-unify us with the Eternal Mind, so that we can experience one-ness with the absolute.

Holmes tells us that "the Eternal Mind knows all things" and this assures the reader that what we are talking about here is the old-fashioned God, re-cast as something more scientific, less loaded. It is subtle theology, and I imagine quite effective - few could quarrel with the notion of the mind, something we all possess.

These two minds - the material and the Eternal - are the essence of Science of Mind philosophy. What the spiritual practitioner is doing is training the small mind (Holmes says "renewing") to work in accord with the Eternal Mind, so that we might recognise our own divinity. This is an individual project, and the work can only ever be done by the individual - we cannot hope to change the mind of another.

By turning our thoughts toward good, the mind is retrained, and material circumstances are changed. In Holmes' philosophy (as in the Fillmores' and Mary Baker Eddy's) good must always trump evil - a good thought held in the mind will drive out all evil, for only good is real. Good is of the Eternal Mind - it is its essential nature.
Posted by Walter Mason at 4:16 PM No comments: