Chicken Soup for the Soul in Vietnamese 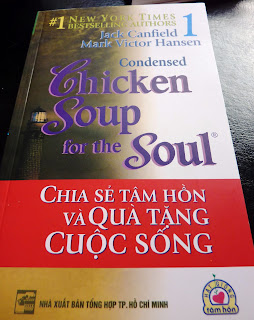 My intense interest in the reading of American self-help in Asia sees me haunting bookstores in Ho Chi Minh City, Phnom Penh and Bangkok, seeing just what is translated, how it is presented, and who is buying it. 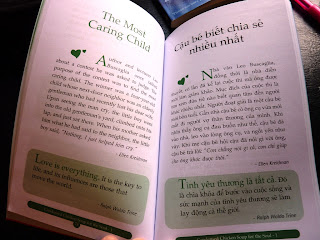 The Chicken Soup for the Soul books are ubiquitous in Vietnam. In my book Destination Saigon I mention how young students in Hanoi sit around the gardens of the Temple of Literature reading them. Bookstores carry shelves full of them, and they are always presented in bilingual editions. I suspect the simplicity of their stories has great appeal for the English-language learner. 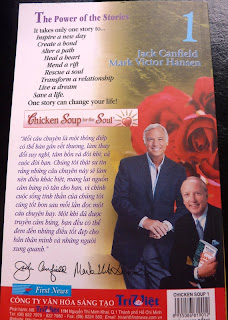 Interestingly, they seem to have received endorsement from all of the main religions, because I have seen them for sale in Catholic and Buddhist bookstores alike.

Vietnamese friends who read them, even quite uneducated and unsophisticated people, are enthralled by the stories in the books and absolutely love them. I once watched a young fisherman lie down and read a pile of them in one afternoon, completely absorbed. When I ased him what he thought of them, he said: "They're brilliant. The most fascinating stories of foreigners and the amazing things they do. Foreigners are so interesting..." For him it was total escapism, an adventure in the exotic. The themes and messages of the stories seemed to have no relevance to his actual life. He was reading them as fantasy.

I am using Aldous Huxley's extraordinary book The Perennial Philosophy for my chapter on the uses of Buddhism in Western self-help.
I have never read it before, and will admit that it's a little heavy-going. It's one of the most peculiarly constructed books - quite a post-modern artefact. There are long passages of reflection and explication, chunks of quotation from the spiritual classics to illustrate his proposition, and then snatches of quotation from other spiritual traditions that further flesh out his theme.
I am surprised, however, by the relative sophistication of his understanding of Buddhism. At first I was put off by the generalisations he was making about the tradition (asserting its godlessness etc.), commonplace observations that have become cliches by now. But he soon delves into it much more deeply, trying to find a place in Buddhism for soul and God so that he can fit it into his scheme of a universal spiritual philosophy that unites humanity. In fact, some of his equivalinces and comparisons are quite clever, but perhaps that's because I agree with them.
The Perennial Philosophy was written in 1945, by which time Huxley was well and truly in his mystic phase having dabbled in the Vedanta school of Ramakrishna (to which he introduced Christopher Isherwood). It harks back to an old idea that there are core similarities that unify all of the religious traditions, and so point to a unified creative source that might be called God. It had been an idea much vaunted by the earlier Theosophists.
It was a reasonably popular book, and became immensely influential on the New Age scene. It was one of those books that was rediscovered and taken up with great enthusiasm by the counter-culture of the 1960s. Huxley sought to prove to Christians that spiritual truth existed in all the great religious traditions, and that the West had as much to learn from the East as vice-versa. In many ways it was a re-statement of the American Transcendentalist  philosophy of the late nineteenth century (for more on that, read Richard G. Geldard's excellent The Essential Transcendentalists). Posted by Walter Mason at 5:12 PM No comments: 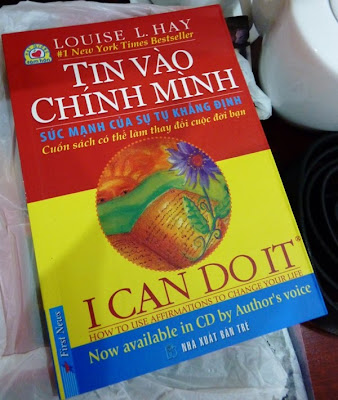 While in Vietnam recently I was pleased to see that the self-help sections in bookstores had grown significantly.
Amongst the offerings were these parallel texts of Louise L. Hay in Vietnamese and English. I couldn't resist. 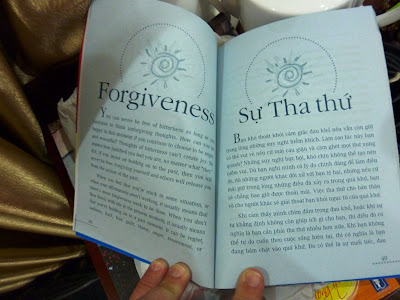 I wonder if they are licensed?
I have actually bought quite a few copies of these to distribute to friends in Vietnam, and the reaction has mostly been very positive - in fact, the ideas are quite radical to them. Some, however, scoffed after reading and said "It's all very well for foreigners to think like this..."
Posted by Walter Mason at 4:32 PM 1 comment: