Sometimes I think there is almost no point in writing about a book which is so huge and so much the subject of a publicity frenzy.
But The 4-Hour Workweek interests me because I see it in many ways as an artefact of a post-literate age. Apart from its physical form (and yes, I was reading the hardcover version) there is not much about the book that is standard. It owes a debt to the bizarre and genre-changing mind of Tom Peters in its random thoughts, insistent bold sections and bullet-pointed directions to real-time information which is destined to date and disappear. That said, reading this book was quite an exciting process, and I looked forward to returning to it. Its format also encouraged skipping, however, and leafing past whole pages that you could tell at a glance were irrelevant to your needs. 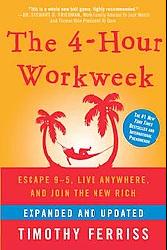 Since reading the book - somewhat belatedly, I'll admit - I have noticed just how completely Ferriss' ideas have sunk into the mainstream of management, marketing and workplace standards. He lead the way in the rejection of email for example, telling people to check it twice a day at most - a practice, incidentally, which has contributed a great deal to my own productivity. I have also heard more and more people talking about "geoarbitrage," a concept I think Ferriss has popularised.


Apart from his obvious formulaic connections with Peters' work, it is hard to place Ferriss on a spectrum of self-help history. I mean, naturally he inherits all of the great traditions of American self-help literary culture, but his obsessions are so focused, and so peculiar, that it is hard to place him culturally, politically and in almost every other lit-crit way. He is, of course, a hyper-individualist and I am certain that critics like Micki McGee would have a great deal to say about his work on this front, but that is not so much my area of expertise.
As always, I am actually much more interested in text than subtext. I am fascinated by the advice he gives, buy the ideal world he seeks to create through his peculiar examples and  injunctions. There is an element of isolationism in his counsel. Ferriss the person seems to despise telephone calls and emails and any kind of un-solicited contact. I think this is a growing modern malaise, one which I recognise because I share it in large part. Ferriss wants to be left alone, and he advises his readers to pursue that same dream. By strictly limiting and controlling how we engage with the outside world, we gain some kind of internal control and can better guarantee the success of our outcomes. It is about living according to the priorities you set, and not those set by others and dictated through the medium of email and telephone calls. Indeed, Ferris admits to not checking his email for up to four weeks at a time, and says that by then most of the emergencies and problems he found described had already fixed themselves.
The final chapter of the book is very representative of the scrapbook-y nature of this text, which itself resulted from a series of blog posts. This last chapter is made up of emails from people telling Ferriss how much applying his techniques has changed their lives. Interestingly, many of these changed lives revolve around the freedom to travel and to work for oneself. Ferriss' acolytes are a restless bunch, privileging the experience of travel and the ability to work remotely while still earning big bucks.
Ultimately, The 4-Hour Workweek proved a very useful read, and I gleaned several good ideas from it which I have applied to my everyday life. I am also glad that I read it because of its popularity and influence. It really is the source of so much contemporary management-speak, so reading it will give you the upper hand when it comes to your next corporate retreat.
Quite entertaining and useful.

Teaser Tuesdays is a weekly bookish meme, hosted by MizB of Should Be Reading. Anyone can play along! Just do the following:
• Grab your current read
• Open to a random page
• Share two (2) “teaser” sentences from somewhere on that page
• BE CAREFUL NOT TO INCLUDE SPOILERS! (make sure that what you share doesn’t give too much away! You don’t want to ruin the book for others!)
• Share the title & author, too, so that other TT participants can add the book to their TBR Lists if they like your teasers! 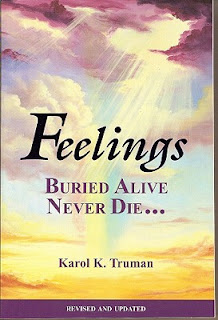 "I know one woman who judges how alive she is by how sick she is. That is, by how many aches and pains she can count. She then keeps the aches and pains alive and well by continually talking about them to whomever she converses with. What she doesn't understand is that the more she talks about her aches and pains,  the more energy she gives them and the more she reinforces her illness."

Teaser Tuesdays is a weekly bookish meme, hosted by MizB of Should Be Reading. Anyone can play along! Just do the following:
• Grab your current read
• Open to a random page
• Share two (2) “teaser” sentences from somewhere on that page
• BE CAREFUL NOT TO INCLUDE SPOILERS! (make sure that what you share doesn’t give too much away! You don’t want to ruin the book for others!)
• Share the title & author, too, so that other TT participants can add the book to their TBR Lists if they like your teasers!

"The real story is that you are an unlimited being. The real story is that the world and the universe are unlimited. There are worlds and possibilities that you cannot see, but all of them exist. You have to start telling a different story! You have to start telling the story of your amazing life, because whatever story you tell, good or bad, the law of attraction must make sure you receive it, and it will be the story of your life."

Posted by Walter Mason at 4:30 AM No comments:

I wish I could stick to a schedule, I really do. I am brilliant at planning schedules, writing them down, organising them to the last minute, and then completely disregarding them. So, instead of sticking to my last plan, here are some self-helpish things from the past week:

Posted by Walter Mason at 12:28 AM No comments:

When I worked at a New Age bookstore, one of the big sellers every year was Louise L. Hay's page-a-day inspirational calendar. Last year, at the Hay House I Can Do It! Conference I bought one for myself and one for my mum. It was the first time I'd ever owned one, and I did enjoy reading a new positive affirmation every day. My mother, too, loved it, and this year the first thing we did when we arrived at the 2012 conference was get our copy of next year's calendar. During the conference, Cheryl Richardson said she buys 100 copies every year to give away to friends, so it seems that plenty of people love this little calendar. Today's says "There is a new spring in my step," so let's spring into the internet to see what's been happening in the world of self-help:

Posted by Walter Mason at 10:46 PM No comments: