God in Humanity in The Science of Mind

Chapter 11 of The Science of Mind goes into great detail about the spiritual treatments that practitioners of Religious Science are meant to administer. Such treatments have always been an important part of the church structure of Religious Science, and some Practitioners in the church have gone on to great fame - most notably Louise Hay and Marianne Williamson. I have never had such a treatement, though I really would like to experience it. I know of only one practitioner at work in Sydney, however .
According to Holmes the purpose of a treatment is to help the subject once more become a properly functioning channel of God's perfect energy. The Practitioner never actually cures anything - she merely reminds the subject of their own innate perfection. With Holmes (as with most of the schools of New Thought), God lives in us, and we live in God. Perfection, abundance and perfect health are our natural states of being, and spirituality is merely re-aligning ourselves with that perfection.
No-one can possibly be separate from the Divine, according to The Science of Mind. People may be confused, they may have forgotten their real being, but the spark remains in us always, no matter how separated we may feel.
My knowledge of conventional theology is really not sufficient to know whether or not this is all heretical, but I suspect it might be. I'd love one of my readers to enlighten me. But as a personal theology it seems deeply comforting and spiritually satisfying - and, as usual, it doesn't seem to be too far removed from Christian Science.
Cure is effected by the practitioner refusing to see bad in their subject. Holmes seems to be saying that the God that is within us can be brought back to the fore merely by being recognised and affirmed. Any other state of being is illusory.
Posted by Walter Mason at 8:09 PM No comments:

The Science of Mind on Prayer

Prayer is not an act of overcoming God's reluctance, but should be an active acceptance of His highest willingness.

Spirit in The Science of Mind

Holmes says that "The spirit of man, which is his self-knowingness, is the only part of him which has volition or self-choice; all else acts as automatic law." Basically he is making a standard Christian Science-inspired division here between the Spiritual, which is of God, and therefore the only real thing, and the material body, which is gross and must fall victim to the material laws of the Universe, as must all material things. The spiritual being is eternal, the physical only fleeting, and doomed to decay.
He seems to be implying here that the spiritual is conscious of itself, but in other parts of his book he says that this spiritual consciousness is subtle and difficult to cultivate. Indeed, many people may lead a whole lifetime ignorant of the reality of their spiritual self - they may even virulently deny such an entity.
Posted by Walter Mason at 1:58 AM No comments:

The Science of Mind on the Soul

The soul, being the seat of memory, already contains a record of everything that has ever happened to us.

The Body in The Science of Mind Holmes is adamant that the body is a real thing, and that its aches, pains, illnesses and worries are real also. In this insistence he is putting himself at odds with Christian Science, which maintains that all of these things are false and have no real existence.
He devotes a whole chapter in The Science of Mind to his theology of the body, and it makes for interesting reading.
He seems to be presenting a kind of neo-Swedenborgian notion that our present physical body is merely a reflection of an eternal spiritual body. He also implies a process of reincarnation in saying that the spiritual body merely changes physical bodies once they are worn out and can no longer serve their purpose of constant spiritual evolution. This changing of bodies is merely a part of the constant process of creation that is the nature of God and being. As Holmes puts it (all in capitals), "THE BODY OF THE UNIVERSE CANNOT HELP CHANGING!" This idea of constant flux and change is, of course, thoroughly Buddhistic, though Holmes is unique in putting a positive spin on it. In the Buddhist conception, this constant change is seen as a source of suffering.
Ultimately, body is the manifestation of our soul. So our body's appearance and state of wellbeing accords with our present karma (a word Holmes uses, having read Annie Besant very carefully).
Posted by Walter Mason at 12:16 PM No comments:

Recognizing that we are surrounded by a Universal Mind, it does not seem strange that certain people should sense our thoughts even when we are not aware of the fact, because thought operates through a medium which is Universal...always present.

Posted by Walter Mason at 6:25 PM No comments:

Science of Mind - The Book 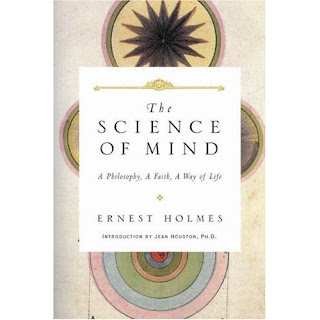 I'm currently attempting to read that enormous book Science of Mind in its entirety. Necessary, really, because of its enormous influence on New Thought and self-help in general. In fact, I would go as far as to suggest that it was one of the most influential books of the 20th Century, despite being almost completely unknown by the literati!
Written by Ernest Holmes, and used as the textbook of for the religion that was once called Religious Science, but is currently undergoing a name change, Science of Mind is an enormous book in every sense, and to be frank, it's not easygoing. Though filled with brilliant - indeed radical - ideas about the new vision of self that was being presented to society by the reformers of New Thought, like most "spiritual classics" it is endlessly repetitive, inclined to drift off topic, and could have done with some heavy editing. But before you start leaving me abusive comments, please know that I think this of almost every spiritual "great" ever written - the Bible included. It's just the nature of the beast. By the time they come to be compiled the information and the authors are already considered beyond correction, and no-one alive dares say "I think you could probably cut the whole of chapter 8..." And the practice still continues.
Of course, Science of Mind was probably never intended to be read in big chunks from cover to cover. It is a religious text, and its context is really the short chunk quoted in devotional literature, meditated on, or read out in church.
Holmes is, of course, the inspiration behind many of the big names of modern self-help (Louise Hay, Marianne Williamson) and he was a fascinating man. One of the final students of Emma Curtis Hopkins, Holmes established a religious empire that included the monthly devotional magazine - also called Science of Mind - that is still in print now.
Originally published in 1926, the book still stands as a radical re-working of traditional thought, and naturally bears the hallmark of Hopkins, Holmes' extraordinary teacher and muse.
In such a massive work (672 closely printed pages) it is hard to identify a single theme, and I am still very much beginning the work of reading and analysing it. So far I can say that the message is that there is a single Truth, and a set of Universal Laws, that embody Good. Whether we follow these laws is up to us, but to do so is natural, if not necessarily easy. But we must trust that this Invisible Force is interested only in our good, and as much as we fall into its patterns, our lives will follow this path of complete Good.
Did I do well in explaining?
Anyway, over the next week or so as I read it I will tease out some of its ideas and provide some quotes. Together we will conquer this massive book that I have been avoiding for over a year.
Posted by Walter Mason at 11:51 PM No comments:

My friend Roger Lathbury, a literary publisher working across the river in Virginia, wrote to J.D. Salinger in 1988 asking if he could reprint his last published story, ‘Hapworth 16, 1924’, in book form. Eight years later Salinger wrote back to agree. He even proposed coming down to Washington, where the two had a meager snack at the National Gallery of Art. Over lunch he asked Roger if he, too, was fond of the Christian Science classics of Mary Baker Eddy. Two things arise from this trashy recommendation. It undermines the frequent comparison of Salinger to Twain, who wrote a hilarious demolition of Mrs Eddy. And it rather suggests that we won’t find much of value in any undiscovered manuscript.

It's interesting how so many critics and commentators have such a difficult time dealing with Salnger's interest in religion and mysticism. Like Hitchens, they use it as a means to belittle him, to imply that he couldn't have been all that great because of his crazy interest in matters metaphysical. Like those other literary lightweights Yeats and Blake, Dante and Milton, Christina Rossetti and Gerard Manley Hopkins.
Apparently Salinger's interest in Christian Science was longstanding, with his daughter accusing him of neglect because his beliefs meant he never took her to a doctor when she was ill. The fact that he was born Jewish leads me to compare him interestingly to that other great Jewish Christian Scientist Joel Goldsmith.
Posted by Walter Mason at 2:58 AM No comments: